Ellen Taylor Sisson, soprano, has appeared as soloist with the Academy of St. Martin in the Fields (Sir Neville Marriner, conduction), the American Classical Orchestra, the Richmond ((VA) Symphony, the Stamford Symphony, the Ridgefield Symphony and the Danbury Symphony. 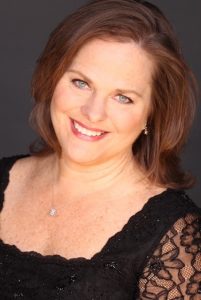 She sings and records regularly with a number of professional choral ensembles, including Voices of Ascension, Musica Sacre, the New York Virtuoso Siongers, the Clarion Music Society, and the Pro Arte Singers. She has sung for performances of the New York City Ballet, the American Ballet Theatre and Mark Morris Dance Group.

Other choral performances include singing on The Late Show with David Letterman and on A Prairie Home Companion. She has sung in choruses with many of the world’s leading orchestras, including the New York Phillharmonic, the Los Angeles Philharmonic and the Royal Concert Orcherstra.

Ms. Sisson has appeared in productions by the Summer Theatre of New Canaan including Cinderella (Queen), The Sound of Music (Sister Margaretta) and in the madrigal quartet for the 2004 and 2007 productions of A Muse in Love.